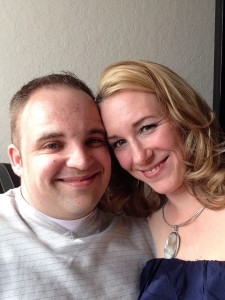 Not every story has a happy ending, but it sure is wonderful when it does.  It’s even better when it has multiple happy endings that don’t seem to stop.  This is one of those stories.  Better yet, it’s a love story.  Glorious!  But wait – don’t expect a Disney style fairy tale.  Each happy ending along the way took much more courage, trust and determination than any Disney princess has ever displayed.

Brenda told me part of her story several years ago in a television broadcast news story I wrote for KXAN-TV.  I remember being amazed how she talked so freely about it with such grace.  Brenda described living a secret life full of manipulation, control and abuse.  Her husband first shoved her down to the ground when she was 8 months pregnant with their first child.  Then the shoving and hitting and yelling started happening more frequently.  At one point, she told me he even put a gun to her head.

“One night he had come home, and I didn’t cook dinner the correct way.  He got upset at me and threw the dinner in pots and pans all across the house,” said Brenda.

He called and texted constantly when she simply went to the grocery store, wanting to know where she was.  Somehow through all of the months and months of mental and physical abuse, she couldn’t see the truth.  She only saw the dream she had envisioned — a life with her children who have both a mom and dad living in the home.  For more than three years she endured the pain, thinking she just wasn’t working hard enough.

“When someone tells you that every day of your life, you begin to believe that is what life is supposed to be like for you,” said Brenda.

Her story took a dramatic turn when she witnessed her husband abusing their young son.  Her motherly instincts immediately made her realize she had to get out of the relationship, and she had to get her children out too.  She found the Texas Advocacy Project, a nonprofit providing free legal help to domestic violence survivors and their families.  The legal team at TAP helped get her a protective order through the courts to keep her husband away, fought to put her husband in jail and ultimately sealed her divorce.

You might expect someone in Brenda’s shoes who had just closed the page on an extremely painful chapter of her life to go into hiding for a while.  Not Brenda.  She was anxious to start rebuilding those dreams and ambitions she had buried for years.  She took over her mother’s day care facility, relocated it to another location and then turned her attention to getting the education she needed to make the day care center an even better place for children to grow and learn.

She got involved with the Texas Rising Star Program through the Texas Workforce Commission.  The program offered support to send her to classes at Austin Community College.  It was her first educational experience past high school.  The course work has given her the groundwork to keep dreaming big about offering quality child care.  Her facility is now licensed to care for forty-four children, and all of her teachers have received more training as well.  In just a few months, Brenda will take a test to get her Child Development Associate credential, a nationally recognized recognition in early childhood education. The Council for Professional Recognition calls the CDA credential “a key stepping stone on the path of career advancement in early childhood education.” Don’t miss this point.  Brenda tells me her CDA credential is only the beginning of her education.  There will likely be more happy education endings to come.

Not Giving Up On Love, Friendship and Family 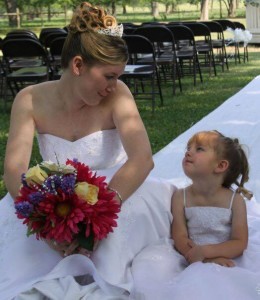 Brenda took another chance on love and married her husband Glenn in 2009.  The couple is raising their two children and Brenda’s two children from her previous marriage.  Four children – two boys and two girls.  It’s the home life she had dreamed of for decades.  She could not think of a better plan, until Glenn did.  The couple had talked about the possibility of Glenn adopting Brenda’s two children for some time, but recently she came home from work to hear him discussing what adoption meant with the children.

“In the middle of the conversation my daughter had tears streaming down her face.  When Glenn asked her what she was feeling, her response was, ‘I’m just happy.’,” said Brenda.  “I was blessed to have the Texas Advocacy Project get the termination of rights and divorce.  Now they are kindly guiding us with the adoption as well.  It’s been a long road for these two kids.  They deserve the moon and the stars, and that’s what they will get!  I’m so blessed to be married to such an amazing person.  Someone who truly wants to be there forever not because he has to!” 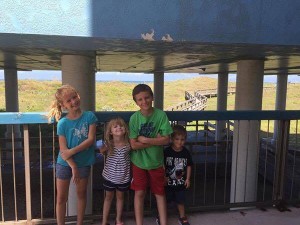 The adoption should be final any day now.  Brenda will celebrate another happy ending with all four of her children and husband.

Write Your Own Story

Brenda is a big believer that life is all about choices, and we could all learn from her story.  She admits not all of her choices have been good ones, but she refuses to throw herself a pity party.

“A lot of people use their past as an excuse,” said Brenda.  “You can sit back and play the poor poor pitiful me card, or you can get up the do something about it.”  Being brave enough to stand back up after being knocked down (literally) and then ask total strangers for help gave Brenda the hope she needed to redirect her life.

“You write your own story,” said Brenda.

She has written hers with great purpose and determination.  My guess is she’ll be writing many more happy endings in the years to come.