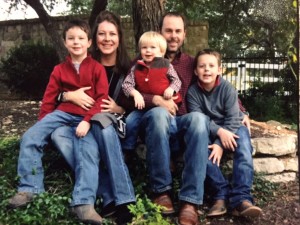 As a journalist, sometimes it takes a bit of searching to find a story you just have to tell.  Other times, the story moves in next door to you.  Literally.  I met Jennifer Buaas when her family rented the house next door to me.  I took over some cookies on Christmas Eve day to welcome her family to the neighborhood and soon learned she had a story she wants to tell everyone.  It’s about household batteries, importance of family and learning to adapt.

The story happened in Hays County, Texas on Halloween morning, October 31, 2015.  At least that’s where it started.  It was 4:30 a.m..  Jennifer, her husband Travis and her 3 young sons were all sleeping, when she woke up to hear her SUV’s horn blaring.

“My husband grabbed the keys, went to the garage, opened the garage door and the suburban was completely on fire,” said Jennifer Buaas.

By the time she woke up her boys and rushed them outside to safety, the fire had spread from the SUV that was parked outside to the garage.  Jennifer’s husband, Travis, quickly called 9-1-1.

“All kind of stuff was popping,” said Travis Buaas.  “It sounded like fireworks were going off.  It was pretty loud.  Scary.” 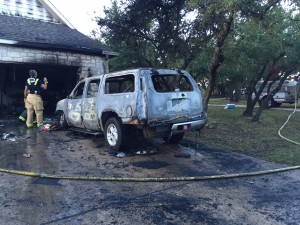 The Buaas’ SUV: Where the Fire Started

When the North Hays County Fire and Rescue teams arrived, the flames had spread through the garage and up into the attic of their home.  Crews worked to control the fire as gusty winds pushed smoke throughout the house.

“It was definitely one of those surreal experiences as you’re running out, and you’re looking back and you’re thinking – we might be watching our house burn to the ground,” said Jennifer Buaas.

It took several days before fire investigators determined the cause of the fire.  The Buaas family assumed it was something that went wrong in the engine of the SUV, but the investigator discovered the fire actually started inside the console of the vehicle.  He told them it all likely started with a hand full of small AA batteries and some DVDs.

“He said the batteries could have gotten jostled so they were touching,” said Jennifer Buaas.  “The terminals were touching, and you have a DVD with the metallic coating of the DVD.  He said it’s a good combination for fire.” 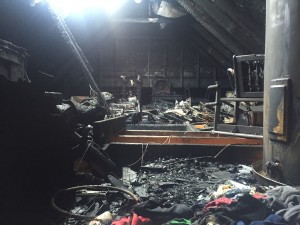 Fire Damage in the Buaas House

The private investigator’s report from Rimkus Consulting Group, Incorporated said, “The fire was the result of light weight combustible materials being ignited by heat produced from loose batteries short circuiting against loose metallic objects stored within the console.”

In other words, the small AA-batteries got into just the right position, came into contact with the DVDs and generated enough heat to set scraps of paper in the console on fire.  Jennifer kept the spare batteries in her car for her sons’ wireless headsets used when watching the vehicle’s built in DVD player.

Mom On a Mission

It took a while for Jennifer to come to grips with the fact that small batteries she left in her SUV nearly damaged all of what her family owned.  She just doesn’t want it to happen to anyone else.  Her mission:  tell others about the possible dangers from improper storage of small household batteries.  She even shared her story in every Christmas card they sent out this past holiday.

*Keep them someplace where they will not be tossed around

*Store them standing up

*Never store them in containers with other batteries.

The N. F. P. A. focuses its warnings on 9 volt batteries, because they have been known to cause fires more easily.  The positive and negative posts on a 9 volt battery are right next to each other which makes it easier for a piece of metal to complete the electrical circuit and create heat.

Most battery manufacturers remind consumers on the back of the battery packaging to store them in their original case.  Jennifer took it a step further and purchased a plastic battery storage container (similar to this) that keeps batteries in the proper position without touching any other object.  She makes sure not to store loose batteries in junk drawers or in bags with other items.  Jennifer and Lt. Jacob Wade of the North Hays County Fire Rescue recommend putting electrical tape over both posts of batteries before you throw them away.

“Your likelihood of it happening probably is not high, but there is something you can do about it,” said Buaas.  “You can store your batteries in simple containers or the original packaging.  Just simple organization can help you from possibly burning your house down.”

Jennifer’s story has had some dark moments.  She told me her boys still have some anxiety every time they smell smoke.  The family no longer builds fires to roast marshmallows on, because it’s still brings back too many tough memories.  Getting past those memories has taken a little longer for her 9 year old son who was sleeping in his bedroom right next to the garage – closest to the fire.

“He was a pretty traumatized and scared little boy,” said Jennifer Buaas.  “It took a while to comfort him and assure him that these kinds of things don’t happen every day, and that he was going to be okay.”

Jennifer has spent a lot of time going through things damaged by the fire, smoke or water in her house and is readjusting in her new rental home.  Through it all, she says she has learned a great lesson in adaptability.

“My husband and I were going through some items, and I just started crying.  You know it’s just stuff, but it’s stuff that holds a lot of memories,” said Jennifer Buaas.

Even though cleaning out those things that hold a lot of memories has been difficult at times, she wants others to remember that “stuff” is simply that.  Just “stuff.”

By the way, the Buaas family rescued their elderly dog from the fire as well.  Jennifer includes him in her story when she says her life is now focused on “everything that has a heartbeat basically.”

Watch the story on Jennifer Buaas and her family that aired on KXAN TV in Austin, Texas.