(* This is part of a series of posts about people using their life stories to inspire others.) 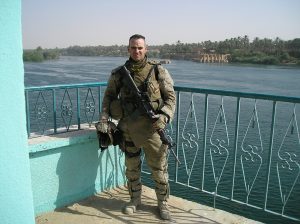 David Little had his life planned out twenty years ago. He would get married, have children and practice law in the same city as his alma mater, the University of Texas in Austin. One by one, each of those dreams became reality. David checked each goal off his list, and then, as life seems to promise – plans changed. He faced not just one heavy duty trial in the years to come, but three big ones. A “triple trial” storm hit David and his family in the next few years that changed his life story dramatically. However in his view, he’s a better person for it, and he hopes others can learn from it.

David had spent more than a dozen years in the US Marine Corps, but was not active when terrorists attacked our country on September 11, 2001. He had three young children and was building a law career in Austin. He resisted the urge to join the fight for nearly 4 years, but after learning of the growing need for lawyers to deploy with Marine units, he volunteered in the US Marine Corps Reserve. In February of 2005, he left his growing family with a combat unit headed towards Iraq. He spent 6 months and eighteen days there helping with legal processes, seeing things in combat he still does not talk about and knowing his wife wondered daily whether he was ever coming home. The pressure was great. The images and situations were often hard to bear, but in the middle of Iraq, he says he learned to turn full control of his life and plans over to God – a lesson he would soon need to rely on back at home in the United States as well. 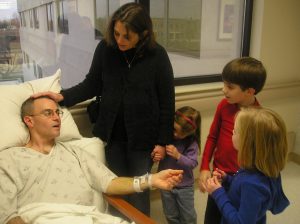 David recovering after a spontaneous stroke at age 40 (2008)

The healthy forty year old was safely back in his routine in Texas when he suffered a spontaneous stroke. David was driving with his oldest daughter down Highway 290 West near Dripping Springs on January 8, 2008, when he suddenly lost control of the right side of his body and blacked out. He was talking on the phone with his wife Amy about dinner plans when she says he began to slur his words. Miraculously, his car somehow ended up in the parking lot of the Sunset Canyon Baptist Church –  his family’s church home. David spent the next 4 days in a coma with his family wondering what life would be like from that point on. His wife Amy was pregnant with their fourth child.

When he awoke from the coma, he faced a long uncertain journey towards recovery. It took almost three years before his brain was able to communicate messages well to his voice and allow him to speak. He has spent more than 8 years in various types of therapies and has regained much more control of the right side of his body. This jarring chapter in his life has taught him to look deeper to find his God given gifts and new ways to bless people. One way he hopes to bless others is through the nonprofit organization he founded A Link To Hope. It offers nontraditional wellness and therapies for stroke survivors through referrals.

“Therapies for recovery from stroke at the hospital were not enough,” said Little. “I had gifts, finances and the contacts who were willing to help. Not every stroke survivor has that.”

Through A Link To Hope, he introduces stroke survivors to therapies he utilized like movement and physical therapy, faith-based counseling, and speech and cognitive therapy. His experience had taught him the value of a multifaceted therapy approach to stroke recovery, and he is passionate about making sure other stroke victims have the same opportunities. 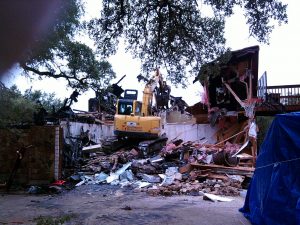 David had just begun seeing bits of progress in his stroke recovery when disaster struck again. Literally. On May 17, 2010, he was driving to his home in the middle of a spring thunderstorm when lightning hit a gas line in the house. The flames were consuming his home when he arrived. He struggled to move the left side of his body enough to grab the family dog, but that was all he could get out. The fire was just too ferocious. David describes the imagery as surreal as he stood outside for 2 and a half hours in the rain watching his house burn. When it was all over, only one wall was left. His family lost everything, but this part of David’s story taught him something he hopes others going through crisis can find comfort in when all seems lost.

“In the midst of chaos, God’s love is palpable,” said Little. “People started coming from everywhere bringing us everything we needed.”

People from his church, his law firm and complete strangers supplied his family with food, clothes and a place to live. Once again, David says he was on the receiving end of God’s promise – trust in Him and He will provide for your needs.

David’s story of a “triple trial” ultimately led him to seminary at Hardin Simmons University in Abilene, Texas where he got his degree in pastoral care in 2017. He hopes to one day be a chaplain at a health care facility to help others dealing with pain, loss and recovery. He sees himself as a very small part of his own life story – a story he enjoys sharing with others.

“If you have a relationship with God, He will see you through anything,” said Little. “Even all this. There’s really more to my story. It’s the story of God’s work in this world and faith in Him even through chaos.” 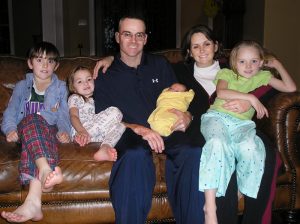 Learn more about David’s story and ministry at his website.