(* This is part of a series of posts about people using their life stories to inspire others.)

As soon as I met Alicia Machado, I could see a twinkle in her eyes that I knew told an amazing story. The 17 year old student at Austin Can Academy took me on a tour of her high school that she will be a graduate of in a few short months. She already envisions the moment she walks across the stage at graduation and looks out on her friends and family. It will be a moment along her journey she doubted would ever happen. It almost didn’t happen. But in June 2017, Alicia will become a high school graduate, and she has a great story of the importance of determination, self worth and intrinsic motivation to tell us all. 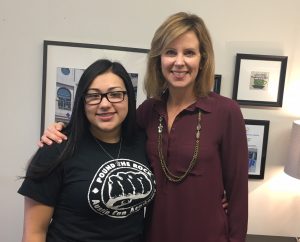 Alicia Machado and Leslie Rhode at Austin Can Academy

Alicia struggled in a traditional Austin public high school for more than a year, barely making a passing grade in several classes. She skipped school a lot and simply walked away from campus at times when she felt she did not belong there. The discipline issues she faced at school started adding up. In her mind, a high school diploma did not seem obtainable.

She heard about Austin Can Academy, a public charter school specializing in offering second chances to students who have struggled in traditional schools, and decided to enroll. However, after just one semester at Austin Can, school administrators told her to go home. She had bad habits of violating dress code and being late to classes. About two months after spending days at home watching her single mother work long hours and thinking about her older brother who dropped out of high school and never returned, Alicia had a realization. The teenager knew no one else could create her future but herself. And she hoped Austin Can Academy would give her a second chance. She called her Austin Can advisor (each student is paired with an advisor to act as a mentor and hold students accountable) and was welcomed back with open arms.

Her second time around at Austin Can Academy was different. Alicia showed up everyday with a purpose.  She trusted that getting her high school school education would send her towards her dreams of going to college and working in the criminal justice system. She had seen her father and brother spend time in jail and wanted to help others get out and stay out of the justice system. With the help of Austin Can educators, Alicia pushed herself in her studies and surprised herself with some of the results.

Alicia’s story speaks to all of us who still have a dream we’d like to accomplish.  Something we’d like to try. Something we’d like to complete. It may be a new job, a new hobby or a new approach to a relationship. We tend to bury those dreams as we get busy with life. Many times, the only thing standing in the way of us getting started… is US. Just look in the mirror. Regardless of the people and noise around us and despite other circumstances, that person in the mirror has to step out and take a chance. Find the time. Ask for help. Do the hard work. The end result may be well worth it. It may be time to get out the shovel and start uncovering that dream.