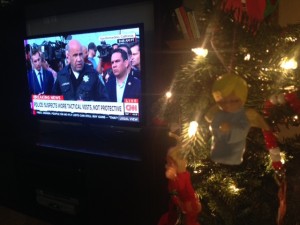 As I put the final few ornaments on my Christmas tree, it seems terribly wrong that the room is full of sound from law enforcement officials giving yet another update on the mass shooting in San Bernardino, California.  The investigators, the journalists and all of us watching have plenty of questions.  However it was my daughter’s question for me this morning that I cannot stop replaying in my head.

We were watching the local news to hear about the weather forecast before school as we usually do.  I knew I would need to monitor the news about the massacre in San Bernardino because of the way it could affect my 10 year old girl.  She was deeply upset after the Sandy Hook Elementary School shootings in December of 2012.  She came to me with many questions after the June shootings at the Emanuel African Methodist Episcopal Church in Charleston, South Carolina.  Then in November I tried to answer her questions about the horrid details of the Paris shootings as honestly as I could.  As a parent, it is heart breaking to watch your child’s view of this world change – from a place full of love and safety to a place that seems to enjoy breeding fear.

When the news segment began, and we saw more scenes of shooting victims being carried out of the Inland Regional Center in San Bernardino and officers with guns drawn, my daughter immediately asked, “Mom, what happened?”  I told her there was a shooting in California, and more than a dozen people were killed.  To my surprise she shrugged her shoulders and said. “Oh, another one.”  Yes. Another one.

As a journalist I knew I was numb to many of these type of stories.  It was almost a necessity.  I always tried to keep a delicate balance of focusing on the facts and getting information out to the public – while at the same time not forgetting I was human.  But now I am afraid my daughter is numb to the tragedies.  Maybe we all are.  We may talk about it for a while with anger and sadness, but then we get back to our routines, schedules and lists.  This scares me.  Being numb to the evil around us cannot bring about the necessary change in this world.

So the stirring question to me – how do I as a busy parent raising two children in an Austin, Texas suburb take action to stop this type of terror?  How can I react so that my family does not stay numb to tragedy?

The news coverage itself offers several causes I could join.  There are interviews with lawmakers about the need for stricter gun control.  There are people pushing for more funding for mental health.  Presidential candidates tell us the most important thing we can do right now is fight terrorist groups and not let people who fit the stereotype of potential terrorists into this country.  These are all issues that demand more discussion.  They are all important.  But maybe there is something more important.  Something all of us can do in our communities.  Something we can teach our children to do.  Something that might ultimately bring about the biggest change of all.  Love.  Reject fear.  Love God and love our neighbors, and teach our children to do the same.  It’s a simple yet extremely complex action all of us can take.

Let’s be honest.  I can go months without saying hello to some of the people who live on my street.  Being a neighbor can take effort.  Being a neighbor takes courage.  I know it sounds fluffy and cliché, but think about it.  When we start finding time to connect with neighbors, we may find ways God can use us in those relationships to bring about change.

So on this day as I decorate my Christmas tree while watching another tragedy unfold on television, I am making plans to be a better neighbor.  They are not plans for a huge block party or things that take a great deal of time.  Maybe I’ll start by asking a neighbor over for coffee, talking to my children about what being a good neighbor means and looking for new ways to give to neighbors in need I have never met this Christmas.  I’m not saying those actions could have stopped what happened in San Bernardino, but maybe changes we make in our small communities could lead to big changes in this world.  I figure it has to start somewhere.  We cannot become numb to evil.  As we approach Christmas, we must remember LOVE is much more powerful.