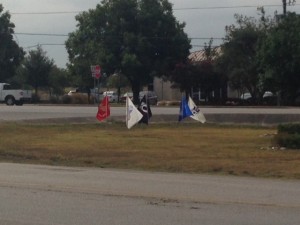 The flags stand proudly in the middle of my town on this September 11th.  As I drove by them on the way to school, I realized how few flags I see around the area on the anniversary of that disastrous day.  We don’t stop as often to think back and remember.  We don’t spend as much time in the news covering the memorials for the 9-11 victims.  Our children who were born years after that day of the terror attacks may not even know why the flags are flying in a special place.  We just do not seem to tell our 9-11 stories as much anymore.  Big mistake.  Here’s mine.  The short version.

On the morning of September 11, 2001 I stood in front of the television watching in horror what was happening in New York City.  I remember calling my KXAN co-anchor at the time, Robert Hadlock, and holding the phone up to my ear without saying much at all.  There was nothing to say.  My body felt empty inside.  We both just said, “I’ll see you soon.  I’m on the way in to the newsroom.”

My husband, Patrick, was working in Washington, DC at the time at the United States Department of Commerce. He called to check in, and while we were talking he suddenly said, “What was that!?”  The noise was the Pentagon being hit right across the Potomac River from his office.  He hung up quickly, and the next several hours were very long as I wondered where he was and what was happening.  At one point I talked to him he was near the White House with several others listening to a car radio to hear any information.  Cell phones were jammed.  The next time he got through to me was hours later.  He was walking across the 14th Street bridge to get out of the District of Columbia and a friend who was able to get a car out picked him up. Relief.  In the following days my husband was sent to New York City to help with recovery efforts.  That’s a whole other story.

The next several days for me involved long work days of getting information out to people while balancing my emotions.  ( I later worked with reporters and anchors in DC who had much longer days, and I thank them and respect them greatly!)  We fought back tears on air and had to take long pauses at times as we took a deep breath realizing the enormity of what had happened.  We also knew what our jobs required.

Journalists covered the stories of the victims, the survivors and the emergency workers who gave it all and more.  Those stories needed to be told and still do.  However stories of what a woman in Austin, Texas experienced that day should be told too.  We should also tell stories of what a man in Illinois or California was doing and how he was changed.  How about we tell stories of how a teacher in Mississippi handled the tragedy with her classroom of third graders?  That day changed us all.  Here are some lessons I took away from it.

There is no such thing as a safe zone.

We should remember evil exists.

Love is more powerful than all evil combined.

When we work together based on our similarities, we are unstoppable.

Take a minute and share your story with someone of what you learned from September 11, 2001 and the days that followed.  We need the stories to connect us and remind us of what makes this nation great… and vulnerable.  We owe it to our children to tell them stories of that day so history does not repeat itself.  We owe it to every person who served and serves in the US military and their families.  Their stories are often too difficult to tell.  They are the people writing the toughest chapters of this nation’s story.  Now fourteen years after 9-11, let’s promise to not stop telling the stories, and flying the flags to remind us all of the lessons learned.