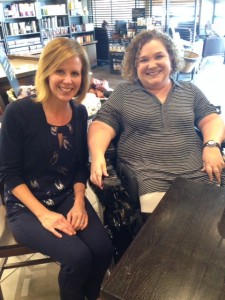 Life is all about your perspective, and my friend Mindy Henderson can put it all into place with three simple words: “Adversity defines goodness.” I have rarely seen Mindy without a sunny smile on her face, although I am sure as I watch her make her way through life in a motorized wheelchair, raising a daughter and working at a full time job, she has seen plenty of it — adversity and goodness.

Mindy was diagnosed with spinal muscular atrophy when she was just 15 months old. Doctors told her parents she would not live past three years of age and she would likely lose her mental abilities. This is where strong willed, faith filled parents come into the story. They started doing physical therapy with Mindy and saw muscle improvements in their daughter. The family got very involved in the Muscular Dystrophy Association (MDA), and Mindy was even the MDA Goodwill Ambassador of Texas when she was 5 years old. 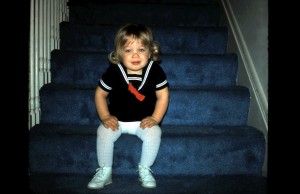 Mindy as a little one!

Her mother jumped all the hurdles to get Mindy in public school in Austin, and she thrived, especially after she got involved in choir in high school. Music is a big part of Mindy’s story, and you might say it’s her medicine. She sings at MDA events and was highlighted at Austin’s South By Southwest music festival one year.

The next chapter: higher education. Mindy was and is determined to be self-sufficient. She obtained a communications/public relations degree from Southwest Texas State University in San Marcos, got a full time job at an Austin technology company, got an apartment and a precious service dog named Jenny. This dog could do everything for Mindy! I loved to watch Jenny open the front door of Mindy’s apartment and greet me when I would visit.

Mindy did not stop there. In her quest to become more independent and not rely on disability funds from the government to help pay the bills, she decided to go back to school and earn a master’s degree. This time her focus was organizational leadership and ethics at St. Edward’s University in Austin.

While she was in graduate school she met her husband, Michael. This was another huge life step that seemed simply a dream at the time of her diagnosis, but it happened — and then Grace happened. Mindy and Michael adopted the five year old girl from China. Mindy was writing another chapter in her life that doctors thought was unattainable. 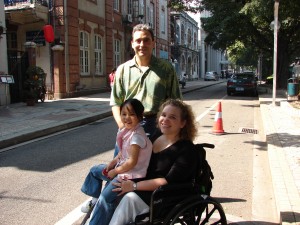 I enjoyed having coffee with Mindy recently. She had agreed to help me as I start this blog. She is a blogger herself with wonderful insight on life perspective.

We talked about different approaches to writing and motivation, but most of the time we talked about what moms talk about – our crazy yet lovable children, their schedules and how we try our best to prepare them for this world.

As Mindy shared her life story with me again, I was reminded of how much she has constantly stayed true to what she says is her message: “Adversity defines goodness.” Throughout all of her life chapters, she has looked for and found goodness, because she is well acquainted with adversity. She makes me want to look for life’s goodness even more and take time to enjoy it.

When I asked Mindy to share a life story lesson, she told something simple. “There’s not much that happens in life that’s permanent. At some point you get to the other side,” said Henderson. When I questioned her about how that applies to her disability, she told me even a disability is easier to live with some days more than others. She says eventually you learn to live with it.   It takes a thought shift — a decision to live in the moment knowing it will not last forever. 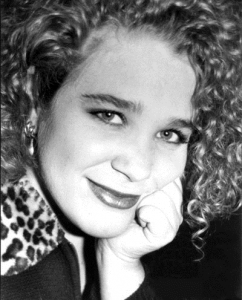 The next time I encounter fear about my future, frustration about my son’s Tourette Syndrome diagnosis or disgust about something I should have handled differently, I hope I think of Mindy’s story. There’s usually a beginning and an end to every adversity in life. If it doesn’t go away completely, I know it will go away as I learn to live with it. I guess I should be thankful for even the smallest of adversities. If I handle them like my friend Mindy, I will find a lot of goodness along the way.